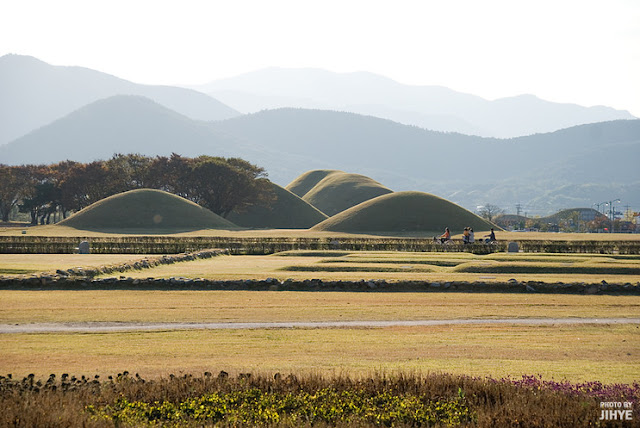 The road to the Gyerim from Wolseong, on the right side of Wolseong district, does not allow cars, so it is a good to walk or ride a bicycle. Flowers to my left side could not attract my attention but the burial mounds did. When you travel around Gyeonju, you’ll meet unknown tombs bulging like that on the fields. You may not know whose mound it is, and why it is there but its shape serves as a diversion. It is resting there filled with 1000 years Silla history so it seems not too much to say that it is mother’s breast from its shape and meaning. 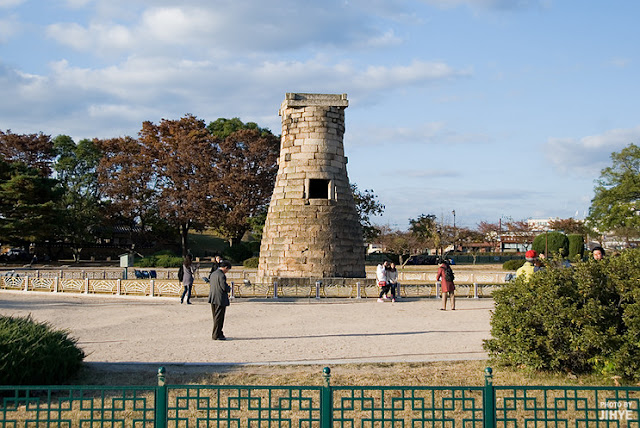 While I was following the road, I encountered cheomseongdae. To take a look at it closely, you need to pay an admission fee but it isn’t really necessary. It is more than enough to look over the low fence.
It is not too much to say that cheomseongdae is the most widely known among Silla’s relics. Probably, there’s no Korean citizen who doesn’t know Cheomseongdae, but I dare say it’s an astronomical observatory to observe stars during the Queen Sondok era that has been designated as national treasure no. 31.
The square hole on the middle of this tower is assumed to be an entrance and there’s a record that says a ladder might have been used. The top of tower is shaped like the Chinese character ‘井’ and it is assumed that an observation device was put on it. How they used this small stone tower remains a mystery. The technology of the Silla era is amazing to the modern people. 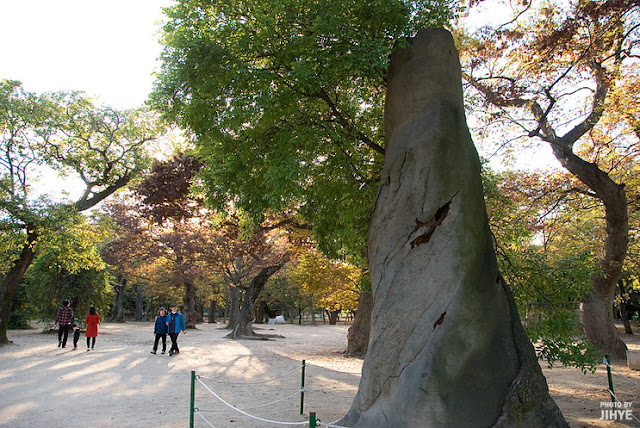 Following the road, Cheomseongdae is facing leads to the forest of history, Gyerim. There are two simple reasons as to why I call this place ‘the forest of history’. First, this place is the setting of a legendary tale: according to the tale,
“When entering the forest, there was a golden shining box hanging in the tree with a white chicken crying under it.”
King Talhaewang heard the crying of the chicken, and sent someone to the forest. There was a clever-looking boy in the gold box. The boy became more and more clever. He was named ‘Alji’, with a surname of Kim(金) since he had come from the golden(金) box and the name of this forest, Gyerim(鷄林) also came from Chinese character ‘鷄,’which means the chicken. 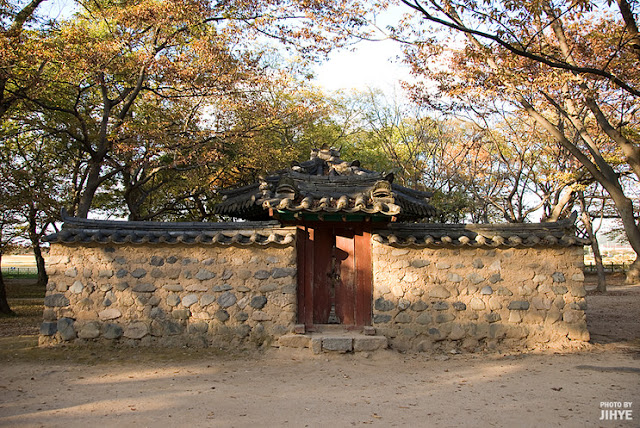 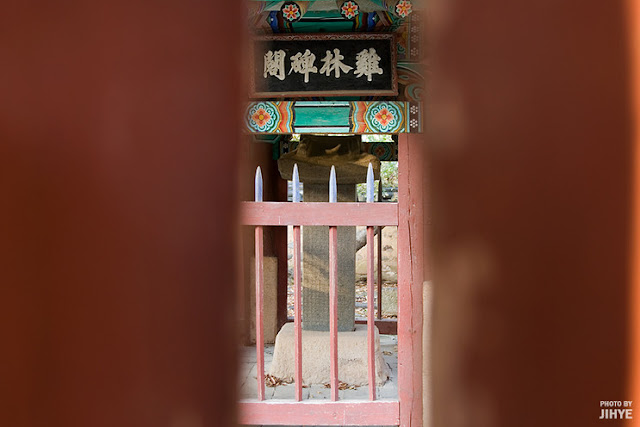 The record about this legend came from this memorial stone in this building which was build King Soonjo’s 3rd year (1803). This building is off-limits to visitors. You can barely look through a crack in the door. 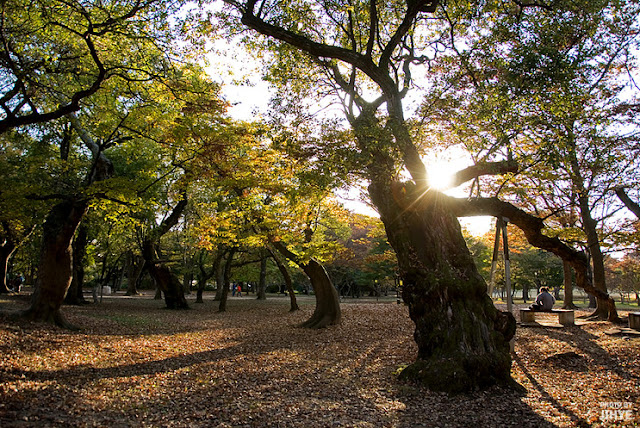 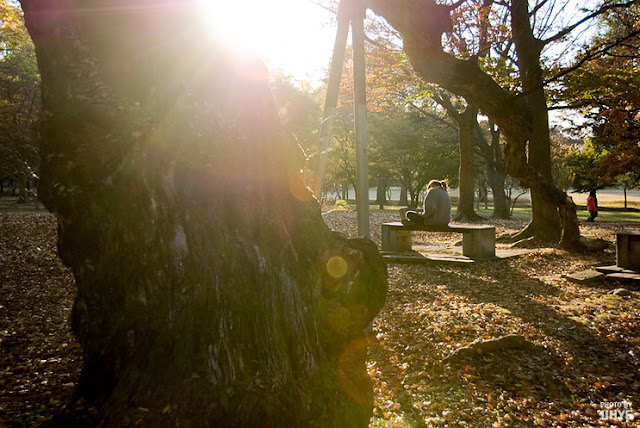 The second reason “for calling this place the forest of history” is because it is brimming with old trees. You could assume how much time has passed from examining the bark and shape of trees. These trees having stood immeasurable time are now twisted and bended here and there but its green and red leaves are filling up the forest beautifully. Already fallen leaves have become a gorgeous carpet. 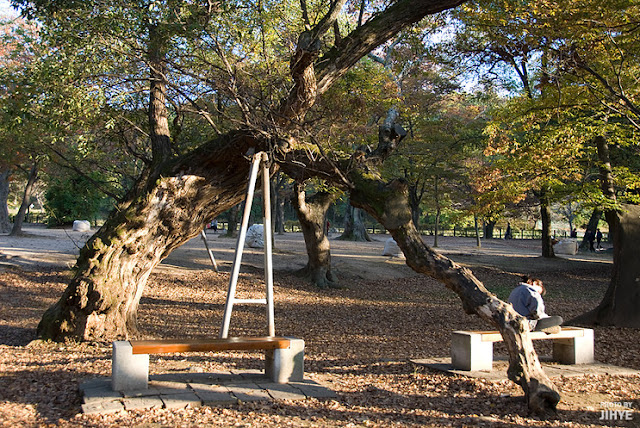 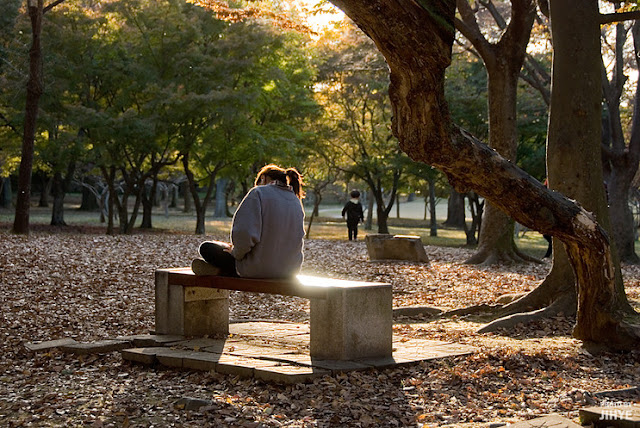 People say fall is the best season for reading. When the sun sets in the west, subdued light starts to envelope the forest. A girl was reading a book there. The lights snuggling into her body created a beautiful silhouette. She seemed to be emitting light. Before I knew it, I was taking a picture of her. She didn’t become aware of someone near her, since she had given herself over to reading a book with earphones on. It’s beautiful and I envied her calmness. 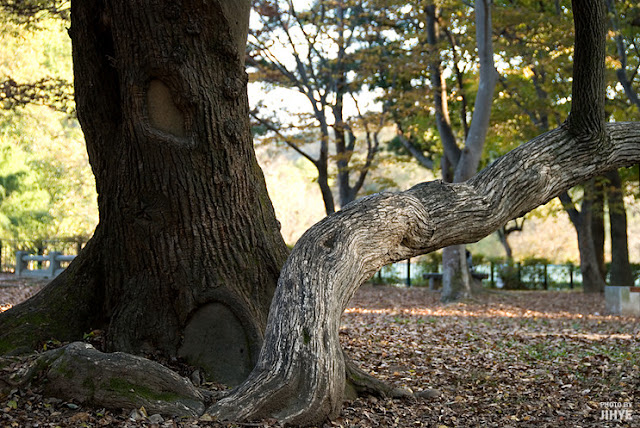 While walking in the Gyerim forest, I got to know that tree has its own gesture and expression. It might be a forced interpretation. I imagined a person’s gesture or facial expression from the twisted shape of tree and the shape of bark. I said to my sister that this tree looks like a person kneels down but she gave me rebuke. She didn’t empathize with me with putting her head a little to one side. That’s ok. Discerning eye might be different per person. 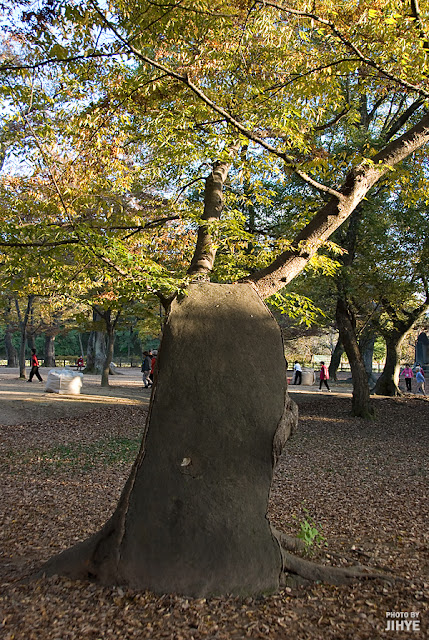 An old and sick tree was filled with cement. Far from looking ugly to me, it reminded me of a dancer raising both arms high while leaning back. 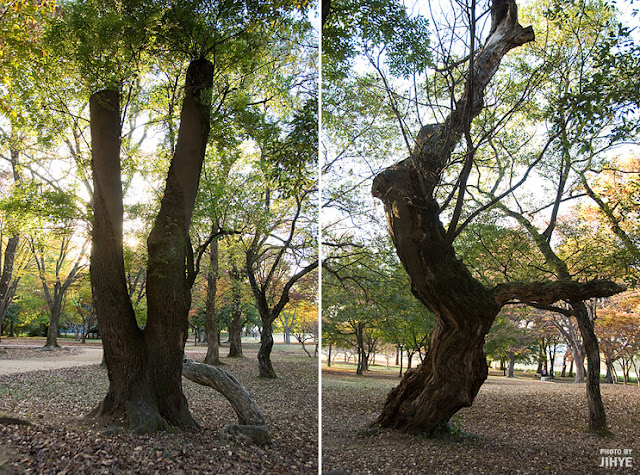 These two trees look upside-down. The tree on the left reminds me of a woman’s lower part of the body. A slender waist start from the ground and both legs rise to the sky. The tree on the right side is obviously a B-boy. Though his upper body is stuck in the ground, his scissor-shaped legs remind me of a dance movement; I can even imagine the posture underground. 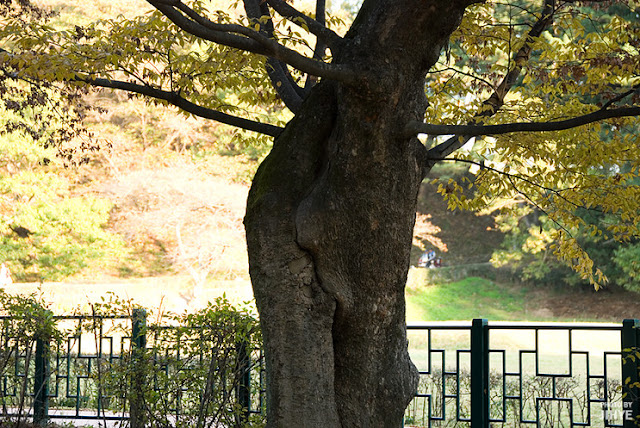 Hey, sister!! They are kissing!!
When I shouted to my sister taking a rest on a bench, she looked where I pointed.
“Uh, yes, they are. Indeed, they are.
I yelled to a tree that cannot see and hear, “Hey, guys, why don’t you get a room!” 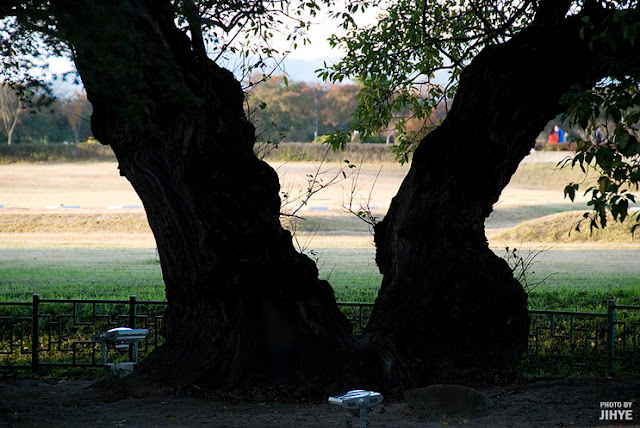 “Sister, don’t you think those trees look like a couple?”
I tried to provoke her sympathy once again but I only got a lukewarm reaction.
“What makes you think so?”
“Ah~ Take a closer look~~ The man on the left is gently gazing at the woman on the right and she looks at a spot far off.”
“It doesn’t look like that to me.” 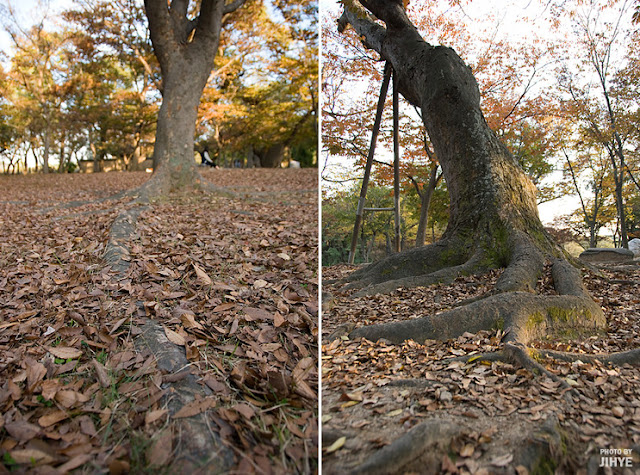 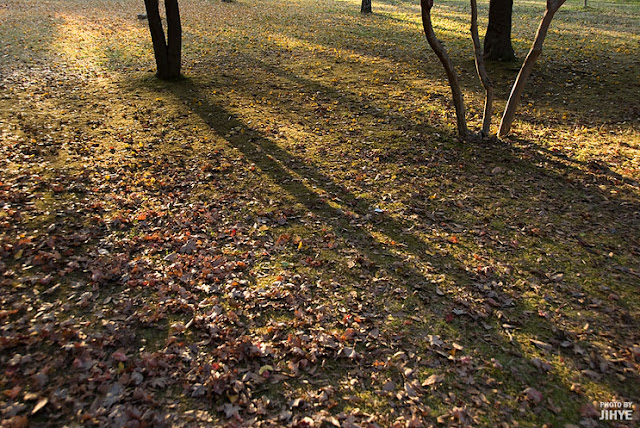 We stayed at Gyerim quite a longer time than we had expected. Sick and tangled old trees that have endured touched me and it was fun to imagine their gestures and expressions. We hadn’t intended to get there at a  specific time but the our visiting time was appropriate to see the warm feast of lights coming through the trees. 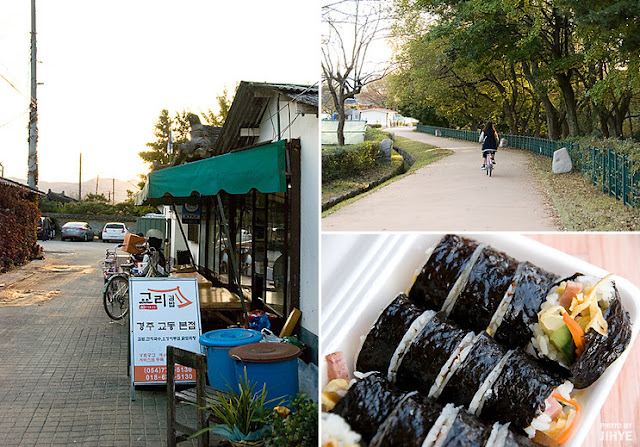 We left Gyerim and went to Daereungwon where Chunmachong is. We dropped by an eatery recommended by the owner of the guest house. We were not very hungry because we had had lunch just a while before but curiosity about the eatery that opened more than 40 years ago led us there.  Gyori gimbap sits on the street between Gyeongju hyanggyo and Yoseokgoong.
It is operated along with a small grocery store and serves Janchi noodles, Squid moochim, and chicken soup among other things besides gimbap. We bought 2 rolls of gimbap with 3000won and tasted it on a flat bench in front of the place. Its taste was not special. One particular difference from other gimbap was that plenty of egg was in it. If you wonder about its taste, it is worth having as a snack between meals.
(※Gyori gimbap : 69 Gyodong, Gyeongju-si, Gyeongbuk / ☎054-772-5130) 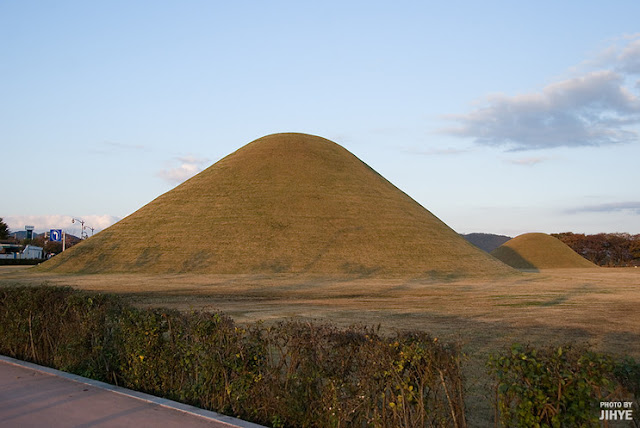 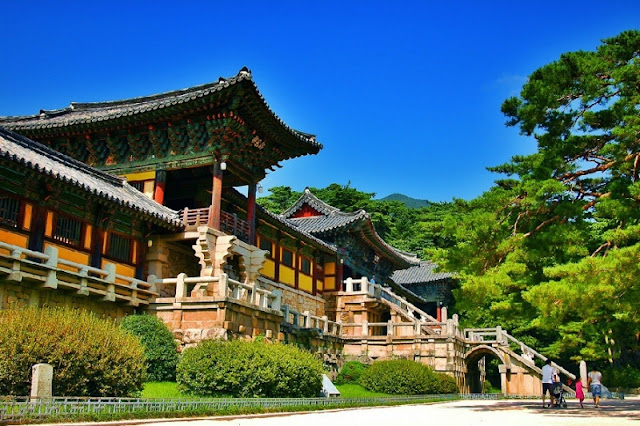